The designer, Bernat Klein, who died in 2014 is the focus of a new show at the Dovecot Studio in Edinburgh at the end of this month.

Hugely influential in the world of textiles and art, Klein was born in what was then Yugoslavia and settled in Scotland's Galashiels after an eventful early life including some work with British Intelligence in Cairo. His eye for colour and design led him not only  into creating his own company, Colourcraft, but also into the world of art and to the commission of his family home, High Sunderland, still considered to be one of the best examples of modernist design in Scotland.

Klein's daughter, Shelley, still lives in High Sunderland and has worked with the Dovecot to bring this retrospective together. The show, A Life in Colour, opens at the end of July and closes on 26th September; more details can be found here. 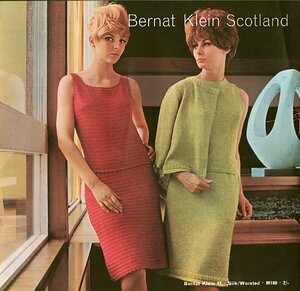 Bernat Klein dressesBernat Klein is often credited with saving the Scottish tweed industry in the 1960's and it is his use of colour that we love. Take a look at these fantastic dresses; stylish and sophisticated and playful.

Thanks to our friend who lent us the Homes and Interiors magazine which features the designer in the most recent edition. Utterly fabulous!